Purchase a full set of toner (colour models) or a black toner (mono models only) in the last 6 months of its existing warranty, and you can extend your printer warranty coverage for another year for free.

You must register your warranty at https://warranty.external.xerox.com and do so for each eligible 12 month warranty period.

Applies only to specific equipment and supplies purchased until 31/12/2022.

Continues for a maximum of 5 years for the eligible device.

A Xerox engineer will attempt online/phone diagnostics . If this fails an onsite engineer visit will be arranged at Xerox's discretion.

For instructions on how to register please Click Here. 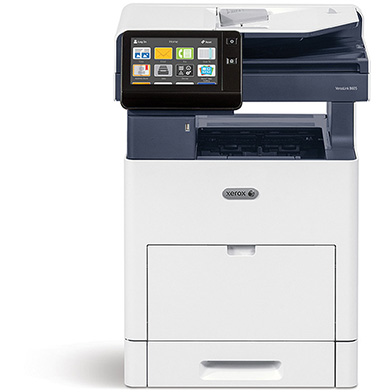 Operating with laser technology, the Xerox VersaLink B605S A4 Mono Multifunction Printer can do more than just print up to 55 pages per minute and produce printouts up to 1200 x 1200 dots per inch. In addition to scanning and copying capabilities, it comes with wireless print technology that enables connectivity to smart phones and tablets, and allows automatic duplex printing at up to 49 pages per minute.

The Xerox B605S offers duplex scanning, and has a scan resolution up to 600 dots per inch. Scans can not only appear on your computer via a USB cable or the wireless network, but they can be saved straight to a USB memory stick, or emailed directly. Copying is also up to 600 dots per inch in resoltuion, with up to 58 copies per minute single-sided, and up to 52 copies per minute double-sided. The Xerox VersaLink B605S can handle a paper weight of up to 220 grams per square metre, including such media as plain paper, envelopes, labels and light-weight card.

The Technology in Operation

Laser print technology is similar to that of photocopying. A photocopy is produced by light reflecting off of the page and onto a light-sensitive drum, followed by static electricity making ink stick to that drum, after which it is transferred to paper and held due to the work of hot rollers. A laser print requires a laser to originally write the information on to a plain page. A laser printer is more complex than an inkjet printer. The electronic data of the document or image on your computer commands the laser beam to precisely draw the file.

The Xerox VersaLink B605S may be used for printing, scanning, copying and saving or emailing scans in an office setting which could include large corporations, schools, universities, hospitals, primary care centres, etc.

Go to Basket
Questions & Answers
Q. Hi, Please could you confirm power requirements for this printer and advise where on printer these are located.
A. Hi, The Xerox VersaLink B605S power requirements are as follows: Operating: 820 W Standby: 90 W Power save: 0.9 W Kind Regards

Choose This Plan
What is PagePack?

PagePack is an all inclusive contract, with Xerox PagePack, you pay a fixed cost-per-page whatever you print. It consolidates all your variable printing expenses to give you a single, known cost-per-page. PagePack helps you understand and manage your printing costs, with free automatic meter reads for accurate billing. It also boosts productivity, with online consumables ordering available 24/7 delivered right to your door. Maintenance and support releases your IT team for more business-critical tasks.

How can PagePack save me money?

PagePack provides a fixed cost-per-page. In an unmanaged environment, every document printed uses a variable amount of ink or toner. You pay a different price for every print. Service calls are unpredictable and so are the charges. With PagePack all your variable expenses are consolidated. Customers pay a fixed cost-per-page that reduces your overall expenditures.

How can PagePack improve my productivity?

PagePack also saves on hidden costs, such as staff resources and prevent shortages of consumables, by simplifying ordering and vendor management. With PagePack there's no need to keep an inventory of consumables on hand. You order the consumables whenever any device requires more.

What does PagePack provide to improve control of my printing?

With our PagePack Smart eSolutions Services Platform you get real-time visibility of your Xerox networked print fleet; MeterAssistant® automates the process of collecting and submitting meter reads for accurate billing, so you pay for what you actually use.

What does PagePack include precisely?
Who provides the services?

All consumables, supplies and service are provided by Xerox, and if you required hands on the repair, you will get an engineer onsite within the next business day, all engineers are highly trained and certified by Xerox

Who provides the supplies?

How do I place an order for supplies?

Once your PagePack contract is registered, you will get your personal log in details to the Xerox Customer Portal, through which you will be able to place your orders online 24/7. Orders can also be placed over the phone by contacting the Consumable Ordering team. Once the order is in place, you will receive the supplies straight to your delivery address at no extra cost, typically within 48 hours If MeterAssistant is installed you will not be required to provide meter reads at the time of placing your orders, therefore we highly recommend MeterAssistant is installed when the device.

We Won't Be Beaten on Price! We check our closest competitors every day to make sure you get the best deal possible!
If you still find anyone cheaper, we'll match the price on request..