Buy this printer and you can receive a 2 year on-site warranty upon registration.

Please Note: Product must be registered within 30 days of purchase. 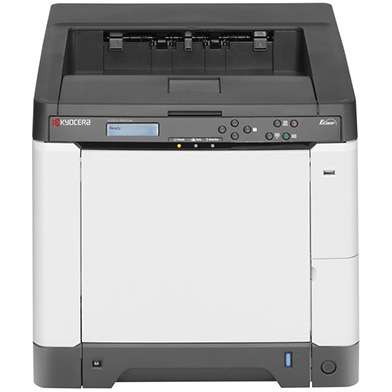 Kyocera has made improvements to its range of colour laser printers by adding the ECOSYS P6021 which combines better energy efficiency and integrated double sided printing to reduce the environmental impact of your printing.

Quality for the Small Office

The focus of the Kyocera P6021 is to provide small groups of workers with high quality colour prints whilst maximising productivity by keeping costs low.

Colour and mono prints are both printed at up to 21 pages per minute and an in-built 667MHz processor ensures even the large jobs are handle quickly and effectively.

The ECOSYS branding stands for ECOlogy, ECOonomy and SYStem printing. Maximum durability ensures minimal running costs, minimal administration tasks and minimal maintenance requirements. Enjoy the freedom of maximising your work-flow without having to worry about what your printer is doing.

The P6021cdn features a modular design meaning that extra components such as additional paper storage, memory upgrades and hard disk drives can be added later, helping your print capabilities grow alongside your business.

The completely integrated system requires only the toner cartridge to be replaced, toner capacities of up to 3,500 pages (1,200 pages include in the box) means this cartridge only rarely needs to be replaced.

Go to Basket
Questions & Answers
Q. Can I print using my Samsung tablet?
A. The Kyocera ECOSYS P6021cdn is not compatible to printing directly from Android Tablets due to not being compatible with Google Cloud Printing.
Q. If I use the xerox replacements on this machine will it affect the running costs?
A. The running cost of this printer are manufacturer estimates based on 5% per page coverage. The Xerox replacement toner can have an effect on the running cost as they cut print costs by an average of 25%.
Q. what is in a maintenance kit
A. A maintenance kit is a set of replacement parts for a printer. The kit is easily installable and includes: user assembly, transfer roller, and feed/separation rollers.
Q. Does the Kyocera P6021CDN ship with all the consumables and cables you need so you have everything you need to print?
A. The Kyocera P6021CDN comes with everything you need including 1200 page starters toners of all four colours. It ships with the power cable and a CD including drivers and user manuals which you can also download online. The only thing you have to purchase is a connecting cable. The printer can be connected via USB or network.
Q. with previous printers I've had to replace image drums is this a consumable for this printer too
A. The Kyocera ECOSYS P6021cdn (1102PS3NL0) does not have image drums as a consumable. For the consumables for this machine, follow the link below.
Kyocera ECOSYS P6021cdn Colour Printer Toner Cartridges

Q. Is this one of the few printers which will carry on printing black when one or more of the colours is exhausted?
A. Unfortunately none of the Kyocera printers will allow you to carry on printing in black when the colour toners have run out, as you say there are very few printers that will do this, to find one that best suits your requirements please contact one of our printer experts on 0800 840 1992

Based on 5 Customer Reviews

Write a Review
Marc Barber
Cheap and slow
This printer is relatively cheap, but that is reflected in it's performance - it's frustratingly slow. It takes ages to warm up before it's first print and repeatedly hangs when printing multiple documents or pages to add more toner.
Roy Saxby
Ideal Home Printer
When my Inkjet printer reached the end of its life I decided to replace it with a Laser printer. I read many reviews of printers and compared Specs and running costs. When I was ready to purchase I spoke to Printerland sales and explained my requirements . They suggested the Kyocera which I hadn't considered.The print quality is very good and it is not too noisy.The airprint facility is very useful and as the printer has some longlife components with a 3year guarantee I think this is a good home office printer.
ashu ghai
Order
No parcel delivered
John Greenleaf
Customer Experience
Printerland customer service is second to none. Guidance, assistance and communication is first class. Many thanks
John Williams
Great printer, great price, great service
The printer is exactly wanted something at a reasonable price with an AirPrint interface. It has solid Kyocera build quality that I know to expect. Took ten minutes to unpack, setup and print to from a Mac. Although printer land did try to up sell me over the (they are business after all) they did process the order efficiently and the printer was on the doorstep the next day. Great service boys!!
Product FinderHide x