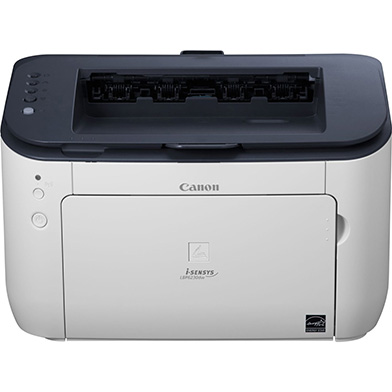 Designed for use in small offices and domestic settings; the i-SENSYS LBP6230dw is capable of producing a high quantity of top quality printed output. With WiFi connectivity, more computers and devices can use the printer simultaneously, helping to increase productivity in the workplace.

The LBP6230dw can be supported by a Network connection, making it incredibly simple for multiple computers and mobile devices to fully utilise the unit’s capabilities. Additionally, WiFi connectivity allows visitors and new users simply connect to the printer and produce their desired output. Additional USB connectivity is ideal for circumstances in which the printer will only be utilised by one user.

With the capacity to produce upwards of 25 printed paged per minute, the LBP6230DW is well-suited to the rigours of a busy printing environment wherein significant reliance is placed upon the unit and its output. The 2400dpi resolution of the laser printer also ensures that print quality will never be compromised, even when the capacity is pushed to the maximum.

A number of features and options of the LBP6230DW help to improve the energy and cost efficiency of the unit. The automatic double-sided printing capability allows to unit to halve paper costs and reduce printing times significantly.

Go to Basket
Questions & Answers
Q. What is the price of a replacement drum unit for a Canon i-SENSYS LBP6230dw? How often do they need to be replaced? Where can I buy one?
A. The Canon i-Sensys LBP6230DW's drum is included within the Canon 726 Toner Cartridge (3483B002AA). This means it will only need to be replaced when the toner needs replacing.
Q. Can you put up to 200 to 250gsm through the manual feed input?
A. This model can handle between 60 to 163gsm through the manual feed slot.
Q. Would this work with Windows 10?
A. Yes, there are drivers available for this model that make it compatible with Windows 10 operating systems.
Q. Hi Can you put card stock through the mulitpurpose tray ? and can you get extra dark black so we can foil the toner successfully ?
A. The multipurpose tray for this model can handle plain paper, Heavy Paper, Transparency, Label, Index card, and Envelopes. It can handle from 60 to 163 gsm. Unfortunately, the consumables listed are the only ones that are offered as manufacturer approved cartridges for this model.

Based on 2 Customer Reviews

Write a Review
Anita
Canon mono printer
Excellent service. Good product. I always buy canon printers (used other makes in past) but use alternative ink for the printer as cheaper.
Jason Hawkes
Good little printer
Good budget mono laser printer. The pages per minute speed is acceptable, and the capacity for wireless and networked connection is brilliant. The only issue I have is that the included CD is not compatible with the latest OS for Mac (El Capitan), so I had to search online for the latest driver. No big deal, but means that I can't give 5 stars.
Product FinderHide x