Support
Your Account
Track Order
Basket
You are here: Home › The Daily Routines Of Employees Around The World

Often grumble about your working week in the UK? You might stop after you discover how our humdrum routines are oceans away from our counterparts abroad.

If you’ve considered emigrating or are simply curious about how working life could be in far-flung destinations, you may be comforted to learn how cushy your role here actually is!

With fairly reliable modes of public transport, rent-a-bikes-a-plenty and decent walkways, our commutes are a breeze.

Those working in Japan are crammed sardine-style into a train for a two-hour circular trip but that’s a doddle compared to employees in Nigeria who endure six hours of commuting per day, largely down to traffic jams and potholes.

In Pakistan, the same slog is reported, with an overcrowded and underserviced transport system to blame.

Finishing times as late as 8 or 9pm are typical in Korea – which sees the work split up by two breaks.

And as if that’s not late enough, you then have to attend a hweshik (회식.) – a team dinner after work. It’s not technically mandatory, but it’s seen as rude to duck out.

Similarly, in Japan, it’s frowned upon to skive ‘nomikai’ – a drinking session held after work. This can last until 9pm, leaving little time to escape your workmates before the next day.

While UK folk often see overtime as ‘extra spends’, it’s not uncommon for employees abroad to work more than 80 hours of overtime in one month, often unpaid. Some Japanese companies have even found staff breaking the 100 hours-a-month mark.

While long days are not loved in the UK, we may be keener if they involved long lunches. In China and Italy, rather than a quick meal deal from Tesco, they enjoy a more leisurely two-hour affair.

In Italy, this is considered the perfect opportunity to venture home for a family meal, offering a better work-life balance.

Here in Britain, most office workers think of Monday as the start of the week, and plan fun for the weekend.

Those in Saudi Arabia start their five-day working week on Sunday at 8am. They’ll graft until noon and have a three-hour lunch, before resuming their shift at 3pm until 6pm.

The day is broken up by the five prayer times and the working year is inflicted by religious holidays. 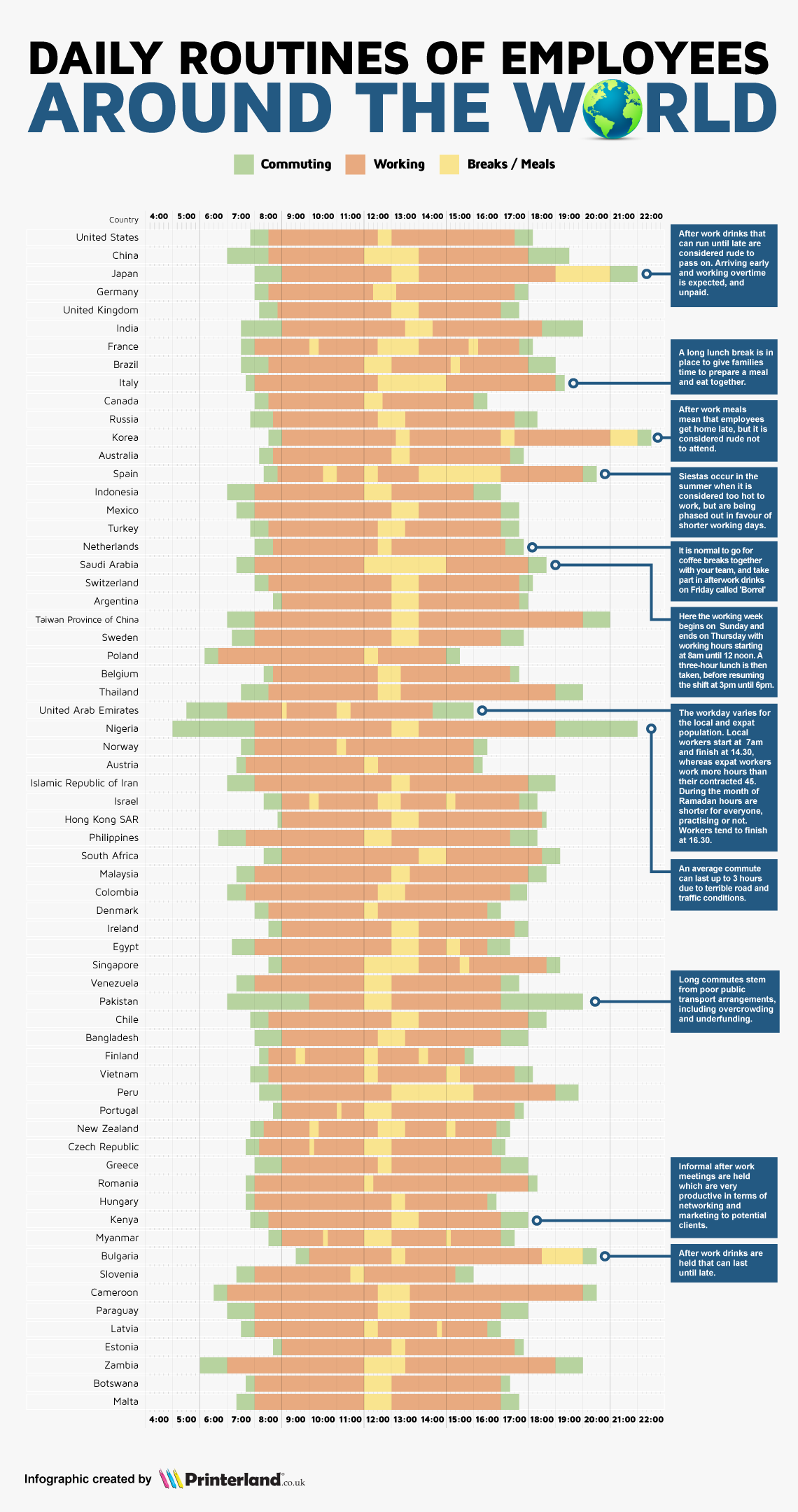 Over time, there has been a worldwide decrease in the number of hours that people are spending in the office, with more importance placed on leisure time.

Spain is looking to phase out the siesta, which now only happens in summer when it’s too hot to work. Scrapping this will also mean that the working day can be shortened to end at 6pm, rather than 8pm and give Spanish families a decent home life.

Korea’s annual employment hours have been hacked by nearly 450 hours according to The Organisation for Economic Co-operation and Development, which reports the average worker cut their annual hours from 2512 in 2000 to 2069 in 2016.

In Japan, pressure is mounting on companies to slash the risk of karōshi (過労死) or ‘overwork death.’

In 2017, their government introduced a concept which saw staff leave the office at 3pm on the final Friday each month. Now a proposal to cap the average overtime to 60 hours-a-month except during particularly busy periods, has been launched.

In 2013, people were reportedly working only 36.7 hours per week, which was as low as the hours worked during the 2008 financial crisis, when work was not readily available.

Londoners clock up an extra 100 hours more than the average UK worker per year.

Disclaimer: This data was collected using a survey that was distributed to workers from the countries displayed.

This site uses Akismet to reduce spam. Learn how your comment data is processed.