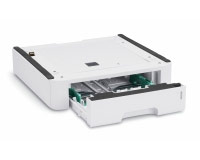 Just like a multi talented human work force, it could be said that every business can benefit from a great all rounder when it comes to printers. That is certainly what you get with the Xerox 6121 Multifunction Printer, which ticks off a number of requirements, but you are not giving it the best possible tools for the job without genuine Xerox 6121 Multifunction Printer Accessories.

There are so many benefits which you can realise with the Xerox 6121 Multifunction Printer - just make sure you are loaded up and ready to go with all the official Xerox 6121 Multifunction Printer Accessories you need. Armed with these accessories, you will be ready to print to a speed of 20 pages per minute in black and white, with five pages per minute possible in colour.

Whether you opt for the 500 sheet paper tray or duplex unit in this Xerox 6121 Multifunction Printer Accessories range, you can look forward to a product which is noted for its long working life when compared to inferior products on the market. You can also benefit from the low power consumption which the Xerox 6121 Multifunction Printer offers when it is ready with the right accessories - saving you money and allowing you to become greener as an organisation.

There are plenty of reasons why we recommend using only official products such as the items in this Xerox 6121 Multifunction Printer Accessories range. For one thing, they have been made to work in harmony with your particular machine, and they also come with none of the worries which can come attached to some third party products, such as the risk of printer damage that could lead to a hefty repair bill and/or a period of downtime.